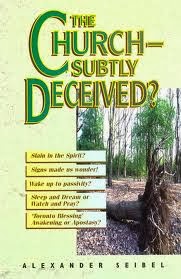 The Church is a
much talked about subject in these days.
We are living
in a world of uncertainties.  Unusual things are taking place day in and day out.

A good number of unusual and unwanted things are happening even among the so-called Christian evangelicals.

Such things are happening mainly due to confusion and deception.

Christ himself has given warning of such incidents at the end time.   We read this in Matthew 24, Mark 13 and Luke 21.

Take heed that no one leads you astray (Matt. 24:4) Mark 13 the last five verses very emphatically say( s)  “Be watchful”.
In this context of the end-time charismatic movement, the writer in this book “The Church Subtly Deceived” gives a warning to the believers, “Be alert and Watchful”  In this book of 107 pages the author very vividly explains many aspects of this dangerous trend prevailing even among some believers circles.
The Book of Acts, at first sight, gives adequate support to this, but a closer look at it will evidently show(s)  it is not so.
It is vital to note that the sections of the scriptures dealing with the return of our Lord Jesus emphasize the area of deception, whether they be speeches of our Lord Jesus or letters of the apostles.
In these sections, signs and wonders are repeatedly mentioned, but not in a positive context, instead, a warning is given concerning them and their function of deception.”

Tweet:  Take heed that no one leads you astray! Read this book review http://bit.ly/1YOCynR

The author reveals a growing penetration of liberalism, modernism, ecumenism, and mysticism into the charismatic movements.
He brought out NINE important and serious matters for the present-day believers as an issue of serious thinking and consideration.

It’s a good study on the following subject matters:

All believers should read and make note of its contents to resist the false teachers of the Word.

One can easily discern the false teachings entered in the Church. He will be able to refute such practices with sufficient scriptural references.
In the concluding chapter, he quotes “Abraham ‘The father of all believers, who did not work one sign, yet he is called as the father of believers’ (Rom 4:12&16).
Abraham did not look at himself but only cling to the promises of God; he held fast the promises of the Lord and therefore only looked unto Him.
He was his real consolation, the true anchor of his soul ( Heb.6:19).  His faith was fully counted on God.
This kind of faith proves God right and therefore let us look unto the Lord Jesus the author and finisher of our faith. (Heb.12:27)  He is the true Savior and victor over all these sinister powers of darkness.
Has the Church the Mandate to heal? A book review by P V Ariel SecunderabadHas the Church the Mandate to heal? A book review by P V Ariel Secunderabad Click To Tweet
In conclusion, he quotes the story of the prodigal son and calls the believers for repentance. Quoting Revelation 2:3 the author says even in spite of the deplorable situation in the seven churches Jesus never rebuked the saints for not having received the baptism of the Spirit or have too few spiritual gifts.   However, five times He says, “Repent”

One of its concluding chapters he wrote an interesting yet serious appendix.  “Gifts of the holy spirit”. In these pages, he gave a fitting reply to the followers of such false teachings.

A very informative book to know the fallacies of the so-called self-styled apostles of Christian faith.

Its a helpful guide and a must-read for Bible college students and believers who want to know the real truth about Jesus Christ and His teachings concerning the last days.

This is the fourth edition of the book and he made some revision and added one more chapter under the title “Has the Church the Mandate to heal?”

In this chapter, he very vividly explains with Bible reference about the fallacies of the so-called healing preachers.   This book is now available from Back to the Bible office for a reasonable price.

Avail your copies before stock exhaust.

For more information please contact Back to the Bible India Office via Email: info@backtothebible.in

About the Author: Alexander Seibel was born in Vienna in 1943. Brought up in a customary religious setting, he later discarded his religion and became an atheist. His main interests as a student were scientific subjects.

He was confronted with the Good News of the Bible during his days as a student through the testimony of some Christian believers of a worldwide missionary movement.

The undeniable fulfillment of biblical prophecies in relation to Israel made it possible for the Lord to soften Alexander’s heart toward Christianity. The final breakthrough, where he finally surrendered his life to the Lord Jesus Christ, came on August 4, 1968, when he listened to a message about true discipleship.

Up until this time when Alexander completed his studies, he was a member of the Baptist Church in Vienna. He now holds a Master of Technology degree and works as a full-time evangelist. He speaks on the subjects of science, the Bible, and evolution versus creation to youth groups and students. He has engaged in an extensive study of the Charismatic Movement and recent trends in our society and churches. He has written several books, some of them up to five editions, which have been translated into several European languages. Alexander Seibel now lives in Germany, is married, and the father of three children.

1.  Are One word or one line.
2.  Are abusive, intimidating, threatening or inflammatory
3.  Make offensive generalizations
4.  Ramble without a point
5.  Use offensive or insensitive language
6.  typed all in CAPITAL Letters.
7.  typed in a language other than English
8.  Are irrelevant to the post in question
9.  Contain self-promotional materials or links
10.  Give unnecessary, advice to Philipscom
Philipscom also reserves the right to edit comments or to remove material that does not conform to our comment policy.
If time permits please do visit this post related to blogcomments.