Posted in Biblical/Religious, and Current Affairs 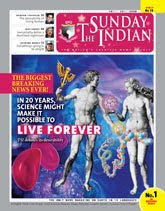 Death: The Biggest Breaking News Ever

‘DEATH’ The word itself creates a kind of fear in people. But, here is a breaking news; the media put it as “The Biggest Breaking News Ever!” IN 20 YEARS, SCIENCE MIGHT MAKE IT POSSIBLE TO LIVE FOREVER. What a wonderful revelation.

This news item was published in the latest edition of the “The Sunday Indian” newsweekly (the only news magazine on earth in 14 languages) edited and published by Prof. Arindam Chaudhuri, a world renewed management guru (teacher). He said in his editorial, “A scientist claiming that those who live for another twenty-odd year might actually go on to live forever. The scientist, Ray Kurzweil, has been dubbed by none other than Bill Gates as the ‘smartest futurist on earth’. So when he speaks, you listen. As per Ray in another twenty years, science would probably invent ways to re-programme our bodies and thereby reverse the aging process; and then nano-technology would let us live forever!

“There will be no requirement for a centralized pumping station such as the heart. Blood will flow in natural motion. Many organs such as the liver, lungs, kidney, small intestine, and large intestine will be absent. This is not a utopia but will be a reality in future. Respyrobytes will enhance the oxygen-storing ability of blood manifold. We will be able to run as quick as Usain Bolt. Our brain will go through many revolutionary changes and its capacity to memorize things, its retention power, and logical ability will grow million times. The body will receive energy in the form of micronutrients and through the skin. So, it will not produce excreta. Then, comes the phase of ‘singularity’. This means the amalgamation of machine and man. It will ultimately lead towards immortality. Once this becomes a reality, then we will successfully make our virtual image. This will empower us with many superhuman abilities. For example, a single man will be able to be present in more than one place at the same time.” Read more @ thesundayindian.com under the caption man

Readers Digest also published this news in its November issue quoted him as saying “The 57 seven-year-old scientist thinks he’ll replace his body parts indefinitely. Ray asks, “How long does a house last?” “If you upgrade it, indefinitely.” Of course, a house isn’t a biological organism. But Kurzweil says that by the 2040s, human beings will be “mostly nonbiological.” www.re-india.com

This is exposed in a book written by a US computer engineer Ray Kurzveil. Its intriguing news to the common man but the Indian scientist community termed kurzveil’s claim of immortality is ridiculous. Dr. Sathees C Raghavan, Asst. Professor of Biochemistry, Indian Institute of Science Bengaluru feels the hullabaloo over his words is really unnecessary. “Actually Ray is not an experimental biologist. He is a well-known computer scientist and he is well-versed in computer science. But his prediction on human longevity lacks a scientific basis. There is no scientific corroboration for his claim. He is being fanciful here. Like Raghavan, most of the Indian scientists refute Ray’s claim.

But, the science and its community are on their experience find a way to live forever. But that desire itself will be dead against to God’s purpose of creating us on this earth. The God’s Word (The Bible) very clearly teaches us about our birth, death and the purpose of our life on this earth. We don’t want to live forever for a miserable life on this earth. The life (the time span on earth), which the God gave us is more than enough. And that will no doubt be a joyous one. If we seek more, no doubt it would be a horrible and miserable one on this earth. So sad to say, this kind of desire to capture the place of God is not a scientist’s fault. It started at the beginning of creation, Adam and Eve desired to be God but faced the consequences. I am really happy about the Indian scientists’ response to the US computer scientist Raymond’s new findings. They bluntly rejected the mere possibility of it. I really appreciate the Indian scientists’ vision and stand on this issue.

No doubt as Christians our response to such claims too can be more or less like the Indian scientists’ community. But we have a clearer cut hope and belief in this matter. In Genesis 3:19 we read: ”By the sweat of your brow you will eat your food until you return to the ground since from it you were taken; for dust you are and to dust, you will return.” The Bible very emphatically states that “once death and then the judgment is ordained for man”. Yes, according to the Bible death and judgment is appointed to all, of course there are some exemption to this, in the case of Enoch (Gen. 5:24; Heb. 11:5) and Elijah (II Kings 2:11 also read 1Cor. 15:51; 1Thes. 4:17).

In the Old Testament itself, the word ‘death’ or the death related subjects are mentioned in 150 times.
There is no doubt about man’s death, it is definite, from the beginning of our birth step by step we are moving towards death, nobody knows when it is, but it is for sure that everyone on this earth should face this eternal truth.

But here is rejoicing news to the people who accepted Jesus Christ as there Lord and Savior. For them, there is no death they are exempted from the eternal death, of course, they will die physically but the soul in them will go back to the one who gave and they will live with Him forever. For His people there is no death as the people of this world, so flocks take heart we are going to live forever with our Savior Jesus Christ. What a comforting thought it is! The people of this world are worried about their life on this earth and try to do what all possible thing to live forever, how sad will be their fate, so sad to think about the fate of the above said computer scientists and his community.

So my dear fellow Christian believers how soothing and comforting it is to know about that pleasant position we have in Christ Jesus. If anyone reading this who are not tasted Christ’s Love, this is the good opportunity to accept Him as your Lord and Savior in your life. Since death is definite, it may approach you at any time, before that happens, take this greatest ever decision you can take on this earth. Please don’t keep it for tomorrow. If you delay it today it may not happen for tomorrow. The Bible says, “Do not boast about tomorrow, for you do not know what a day may bring forth.” (Proverbs 27:1). So take this serious and vital decision in your life today itself and win Christ and live forever. May God help you. PV

POSTSCRIPT:
THE WEEKLY PUBLISHED A PORTION OF MY COMMENT ON THE COVER STORY, IN THE CURRENT ISSUES OF IT’S WEB AND PRINT EDITIONS: READ MORE @ THIS LINK:
http://www.thesundayindian.com/15112009/storyd.asp?sid=8021&pageno=1

A Freelance writer from Secunderabad India