Posted in Current Affairs, and Politics

Irrespective of the outcome,

Congress is bound to emerge

as one of the two biggest

It will leave its president

with a major role to play

behind and in front of the

When minister of state for

said he would be willing to sweep

the party office in Chhattisgarh if

Sonia Gandhi, he was repeating

about then Prime Minister Indira

Gandhi when nominated President of

India during her tenure.

Times may have changed but the message then – as now –

remains the same; Madam is supreme….

The stories goes on and on… Our Political leaders color

or statements.  So sad are our politicians new developing

trends to stand on…

To Read on please click at this link. Sonia vs Modi

Also please read my feedback on this story 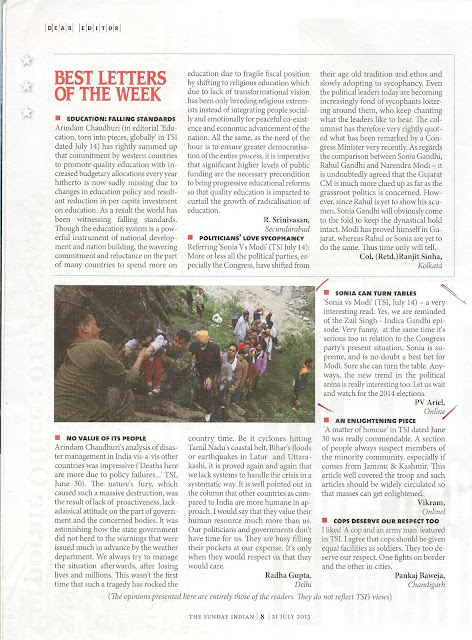 A BIG Salute to Our Jawans (The Indian Para Military Forces) 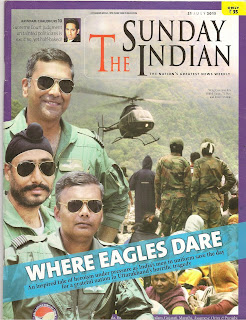 An inspired tale of heroism under pressure as India’s
men in uniform save the day for a grateful nation in
Uttarakhand’s hour of tragedy.
Here is a report from The Sunday Indian’s Reporter
Mayank Singh.  And my response to it.
The unsaid truth about all natural disasters runs a familiar course. In absolute distress when the chips are down; when systems have broken down, when no civic worker or state police force is within hundreds of miles, when the already minimal and overstretched infrastructure has collapsed and millions need to be rescued from certain death, it is India’s defence forces that save the day for everyone – a grateful nation, its tunnel vision politicians and inept civilian administrations.

To Read On Please Click on this links:  Where Eagles Dare

A WARM WELCOME TO PHILIPSCOM
We appreciate your valuable time.  Please share your views in the comment box, we very much value your feedback and we do reciprocate.
DISCLOSURE: This website contains endorsements for products and services.
If you click on such links that we recommend we may receive a commission at no cost for you.
In fact, this helps us to cover the maintenance expenses of running this site.
Please note that all links are not affiliated links.  To know more please click on the below image.
Thank You.

A LOVING MOTHER IS REMEMBERED

JOIN IN AND WIN FABULOUS PRIZES!

Got A Blog? Maximize Your Ad Revenue