Posted in Biblical/Religious, Letters/Feedback, and Publications 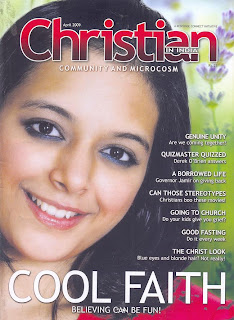 (A Review on Its Inaugural Issue)

‘Christian IN INDIA’ The new Magazine from Times of India publications

is not just another Christian monthly instead it is an entirely different one. The inaugural issue is filled with information about all classes of Christian community. It contains the writings and opinion from well known Christian and non-Christian writers and celebrities from film field to the business world. Many well known personalities’ life experience and their encounter with Jesus Christ and His followers are very well presented in the first issue.

Its editor ‘Carol Andrade’ in her editorial emphasized the high time need of Christian unity irrespective of their denominational background. She wrote: ‘the magazine is a platform and a showcase at one and the same-‘a platform for the community to meet across denominations, faith rituals, social levels and issues, as well as a showcase from which to present itself to people of other faiths in the unity of their fundamental belief.’ She wrote in the opening article’s “Towards a Genuine Unity” intro – “revitalized ecumenism that the country is witnessing as Christian groups turn towards each other in the essentials of their faith in Jesus Christ”.

Almost every alternative page is allotted for colorful advertisements about the day to day essentials, mainly aiming at Christians, the prime readers of the magazine. No doubt adverts are the lifeline of any publication, and without that it’s really difficult to survive. But placing it in the pages requires more care, this I say in connection with an advert placed just after the first article ‘Towards a Genuine Unity’. The title head, illustration and the highlight sentence filled in one full page and in the next page you find a glossy advert from a cake company with a funny slogan “We’re celebrating the fundoo moments of life” and in the next page only the article starts. This gives a confusing impression to the readers, what’s the connection with the title and the slogan. If take little more care in this aspect, such confusion can avoid.

Aravind Adiga, author of “The White Tiger”, the Booker Prize Award winner for 2008 narrates his experience with the Christian community-the schools and colleges run by the Christian missionaries in small towns through out India-He says: Christian institutions have played a key role in providing the country with a strong educational base-without its engineering, medical and technical colleges would not have thrived as they have. Pandit Nehru spoke many years ago of the “temples of modern India”-Catholic schools, like St Aloysius College, have as much right to this title as any other institution of the country”. He wrote in his article “Educated? Then speak for the rest” “For over a hundred years, Catholic schools have been educating Indians of all religious background; charging very little money in most cases, they have provided boys and girls with access to a rigorous schooling in English, science and mathematics. Equally important has been the emphasis on secularism and social justice provided by these institutions. Hindus Muslims and Christians study side by side in these classrooms; the friendships that are formed here between children of different faiths can last for a life-time…. “Catholic institutions – particularly those run by the Jesuit order – have also historically emphasized the need to expand social and educational services to the poor and the downtrodden.

In this issue you find an interesting and informative interview with the world famous quiz master, entrepreneur, trail-blazing businessman, Derek O’Brien. This is presented in a different style with an eye capturing fonts.

An Anglo-Indian by birth Derek was a journalist, and then entered into advertising and later made quizzing into a fine art through live shows, television, demonstrations, books etc over a period of 20 years. He says with much joy and proud, “We are the only community in India, with the word ‘Indian’ in its name. Isn’t that wonderful? We are proud of our language (English) and seek to be more inclusive. Though he is an (AI) he can read, write and speak fluently in Bengali. He further says to another question, “I follow a 4-word mantra: Make Meaning, Make Money – and meaning must always come before money.

In another article, ‘Why don’t our children go to church?’, Margaret Da Costa asks herself and answers questions on this serious topic.

Father Anthony Charangat Editor of the Catholic magazine, The Examiner asks why “talented and competent Christians (are) so low-profiled in the world of business and politics”. Through this article he made a thought provoking statement: “Either we put up or we shut up. In other words, either join the mainstream or quit complaining.” At the same time he accept the fact that there are a good number of Christian in industry, administrative services, finance, politics, education medicine, science, engineering and sports who have done the community proud. Then he list out a number of people starts from Mother Teresa.

Another feature covered in this issue is the reports of Sandeep Mishra on the communal violence that hit Christians in the Orissa’s Kandhamal district and the current developments in the region.

Yet another worth reading and encouraging article is the testimony of Rajeev Menon a successful businessman who has applied his faith and beliefs to the way he runs His Company. A believer in Jesus Christ, he describes his journey to the present. A conservative Hindu by birth, his encounter with Jesus Christ narrates in his own words: “My encounter with the Mentor, the name I use to describe Jesus Christ, brought me out from the very edge of the precipice. It brought me face to face with the notion that there exists an eternal dimension to life and that there are consequences to everything one does. He continued, “I am so grateful to the Mentor for bringing about such a paradigm shift in my ideological moorings. Earlier I thought that whatever I did shouldn’t be examined in the light of right and wrong but only if it feels right at that moment. He showed me the need and necessity to speak the truth and basically, set the moral standards for me. In fact, He became the very standards for the way I lived my life, conducted business, interacted with people and even formulated the philosophical frame work that defines my thought process.” There is a box item under the title ‘THE COMPANY HE KEEPS’ along with his testimony; it will be worth quoting the same here:
Rajeev Menon set up N-able solution with three principles in mind:
• Never to borrow to support the business
• Never to ask anybody to leave because of no business
• Never to default on paying salaries on the 1st of every month.
His company is into software development for off shore companies and so far, he has managed to stick to his principles even in these recessionary times.

What he is really excited about is the latest product developed by the company. Four years in the creating, using learning process, domain inputs, doing research making functional changes from the users’ point of view, the product, called e-Flock: Shepherding Solutions, helps churches manage their congregation and makes them function more effectively.

Already launched internationally with considerable success. e-Flock aims at giving churches a boost into the digital age, making it easier for priests, pastors, deacons etc to stay in touch with members and congregations on a much more personal basis. It has single and multi church consolidation models with built in features.
For more information log on to: www.n-ablesolutions.com or www.eflock.net.

Other contents worth mentioning are Carol Andrade’s report on Maharashtra Governor S C Jamir’s borrowed life. Four attacks upon his life have only strengthened his belief in God. It changed the way he thinks he should live his life- with love, caring and compassion. Another report is about Daisy Irani the famous actress and her multi religious big family of Parsi, Christian, Hindu and Muslim. The report shares the changed life of a chain smoker Irani. And another interesting piece is the conversation by the editor with the famous Hindi actor comedian Johny Lever and his encounter with the real healer Jesus Christ and his experience of a changed life. Yet another report is on a group of Christian entrepreneurs and businessmen who joins hands to create wealth, pool resources and encourage the frightened to get out there and change popular perceptions of the community. Under the leadership of Freddy Mendonsa ‘Dimensions Diamonds formed. They can be contacted by logging on to their website: www.dimensionsdirect.com

Flipping through the pages I found this magazine very unique in its appearance as well as in its contents. Few suggestions to its editor and publishers of this esteemed magazine. Its font size is too small as; many of your elderly readers may find it difficult to read, so please increase the font size to a minimum of 10 or 10.5. I think this is possible, at the present format you have given enough margin space to both sides. Give more space to air the reader’s views and one or two separate pages for testimonies from Christians especially the one who experienced this faith from other backgrounds. Give more space to your readers’ responses. More spiritual articles with Bible verses quoted also give prominent place in the magazine. Allot separate pages for children, youth and women. Create an opportunity to interact with people who connect the magazine via email. Publish the writers email id below their writings so that readers can interact directly with the writers.

This 88-page thought provoking and beautifully packed publication will definitely be accepted and adored by not only the Christians but also by other sections of faiths.

Kudos to the editor and publishers for bringing out such an elegant magazine-a platform-for the Christian community in India.

A WARM WELCOME TO PHILIPSCOM
We appreciate your valuable time.  Please share your views in the comment box, we very much value your feedback and we do reciprocate.
DISCLOSURE: This website contains endorsements for products and services.
If you click on such links that we recommend we may receive a commission at no cost for you.
In fact, this helps us to cover the maintenance expenses of running this site.
Please note that all links are not affiliated links.  To know more please click on the below image.
Thank You.

DO YOU WANT MORE TRAFFIC & ENGAGEMENT ON YOUR WEB/BLOG? THEN IT’S FOR YOU. CLICK ON THE IMAGE

Please Read Before You Pitch

Please Read Before You Pitch